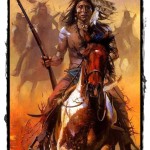 Indigenous Americans were about as different from Europeans as you could possibly get, but was conflict really necessary?

At the time of first contact, the indigenous cultures were quite different from those of the proto-industrial Christian immigrants. Some of the Northeastern and Southwestern cultures in particular were matrilinear and operated on a more collective basis than Europeans were familiar with. The majority of Indigenous American tribes, for instance, maintained their hunting grounds and agricultural lands for use of the entire tribe, while Europeans at that time had patriarchal cultures and had developed concepts of individual property rights with respect to land that were extremely different from those of indigenous Americans.

These differences in cultures between the established Native Americans and immigrant Europeans make one question whether it made any sense for one to try and assimilate the other.

One of the most beautiful things about our world is the variety of cultures it sustains, and to see a culture disappear, especially by force, is tragic.

I try to raise this point throughout my young adult adventure series, Central Park Story, by illustrating that different cultures don’t necessarily have to collide, but can live side by side in harmony…assuming there is respect and restraint exercised on both sides.

< The Mayflower Compact: The First Truly Democratic Document in America The Seven of Spades…Lucky or Not? >