Home »Central Park Story - Book One »Bet You Didn’t Know There Are Two Alice in Wonderland Statues in Central Park!

Bet You Didn’t Know There Are Two Alice in Wonderland Statues in Central Park! 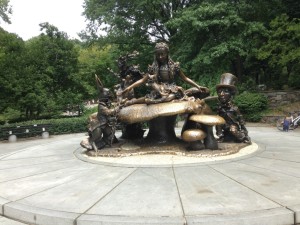 The Alice in Wonderland statue you’re probably most familiar with is pictured to the right, but there’s another, lesser known statue hidden away in the Sophie Loeb Children’s Playground.

Unless you’re a five-year-old, you probably aren’t aware that it even exists (see second photograph).

The more familiar bronze Delacorte sculpture (created in 1956) is generally used as a jungle gym by its young visitors while the other, lesser known statue, was designed as a drinking fountain and actually predates the former by twenty years (1936). 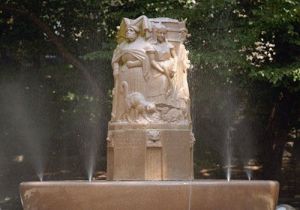 The Sophie Loeb statue of Alice in Wonderland, this time including the Queen of Hearts

I prefer the depiction of the characters on the Loeb over the Delacorte statue. They seem closer to the way I imagined them when I first read Lewis Carroll’s famous work,  especially the Queen of Hearts who appears more than once in my young adult adventure series, Central Park Story.

Click here to cancel reply.
< Hans Christian Anderson Reads to the Ugly Duckling at the Conservatory Pond The Central Park Carousel and its Rambunctious Steeds >