Home »Central Park Story - Book One »The Bethesda Fountain, both in Central Park and in the Bible

The Bethesda Fountain, both in Central Park and in the Bible 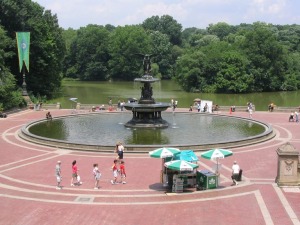 The Bethesda Fountain in Central Park–a powerful symbol of healing

Most people don’t recognize the name ‘Bethesda Fountain’ when they first hear about the one in Central Park.

Not so back in the 1860s when both the fountain and the Angel of the Waters were first installed.

Back in the mid-nineteenth century, four out five people went to church on Sunday and read the Bible daily, while the remainder were looked upon with raised eyebrows.

In their estimation, the fountain was the modern day equivalent of the Bethesda Fountain in the Old Testament and a place of miraculous healing, and they would have associated it with the following verse from John 5:2:

‘Now there was at Jerusalem by the sheep’s market a pool having five porches. In these lay a great multitude of impotent folk: the blind, the halt, and the withered, waiting for the movement of the water. For an angel went down at a certain season into the pool and troubled it, and whosoever first stepped in after the troubling of the water was made whole of whatever disease he had.’

Several epidemics of cholera had swept the city in the early nineteenth century, killing thousands, until the Croton Reservoir was installed next to Belvedere Castle and stopped them short; hence, the Bethesda Fountain and its angel represented a modern-day miracle: clean and uncontaminated water.

Christopher Middleton, the main character in Central Park Story cringes as his friend, Jennifer, gives him this historical background, but it’s healing significance isn’t lost on him by the end of Book Two.