Bow Bridge: A Symphony in Stone 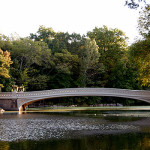 It is as if a piece of music suddenly took on a physical form.

Bow Bridge, named for its graceful shape, is reminiscent of the bow of an archer or violinist. This handsomely designed bridge spans the Ramble Lake, linking Cherry Hill with the woodlands beyond. When the park was in its initial planning stages, the commissioners requested a suspension bridge (yikes!). Calvert Vaux, the designer of the 36 bridges in the park, objected and a compromise was struck with this refined, low-lying bridge. 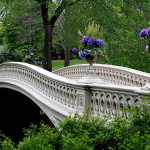 I cannot imagine a more beautiful bridge, can you?

Today, Bow Bridge is a muse for photographers and writers alike. Rising from the bridge are eight cast-iron urns, installed by Central Park Conservancy in 2008 as replicas of the originals that disappeared in the 1920s.

The bridge appears in many episodes of my young adult adventure series, Central Park Story.

< The Frick Museum–What a Gem! Baseball in Central Park–a Real Home Run for the Game >