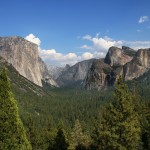 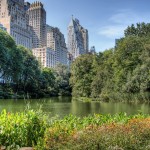 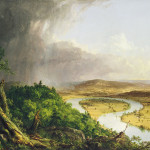 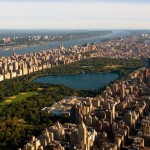 Is Something Really Buried Under Cleopatra’s Needle in Central Park? 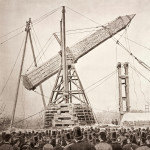 Here’s an artist’s rendition of the obelisk being installed in the park. He put the Brooklyn Bridge, completed a few years earlier, in the background, though the bridge would not have been visible from the park when the obelisk was installed.

It is one of a pair that were commissioned for Heliopolis on the banks of the Nile in 1450 BC by an Egyptian pharaoh who wished to celebrate his 30 years of reign. The twin monuments were then moved to Alexandria in 18AD where they remained until one obelisk was moved to London in 1878. The second, erected two years later in Central Park, was offered by the Egyptian Khedive to America in exchange for funds to modernize his country.

As you can see from the picture to the right, moving the 69-foot, 220-ton granite monument from Egypt to New York was an arduous and delicate process. It took 112 days from the time the Obelisk first landed on the banks of the Hudson until it reached its future position in the park. Laborers inched the monument on parallel beams, aided by roll boxes and a pile-driver engine. Thousands turned out on January 22, 1881 to marvel as the obelisk was turned upright. 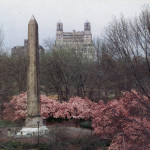 The Obelisk as it appears today. I wonder if Pharaoh Thutmose III ever dreamed that his monument would end up in a park on the other side of the world?

To add some mystery to an already mysterious object, a well-known journalist named William Henry Hurlburt buried a time capsule beneath the monolith. In his box, he included an 1870 U.S. census, a Bible, a Webster’s Dictionary, the complete works of Shakespeare, a guide to Egypt, and a facsimile of the Declaration of Independence. Last but not least, another smaller box was placed in the capsule by the man who orchestrated the purchase and transportation of the Obelisk. He will probably be the only person to know its contents…at least until some archaeologists decide to excavate the remains of New York City some four thousand years from now!

No blog on Central Park would be complete without mentioning the buskers that frequent the Promenade, the Terrace, and the Castle.

Their talent, virtuosity, and, on occasion, genius, add a new dimension to the cultural milieu of the park.

Though Olmsted and Vaux never would have imagined such performances taking place beyond the confines of the Naumberg Bandshell where formal concerts were sometimes held, it demonstrates the flexibility of their original design that it could accommodate such changes in the future.

In my young adult adventure series, Central Park Story, Christopher Middleton, the main character, happens upon an unusual performance on the Bethesda Terrace, conducted by none other than the Mad Hatter himself!

Here’s one of the many performances that take place along the Mall on a sunny afternoon: 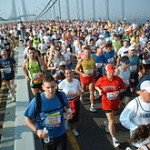 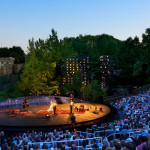 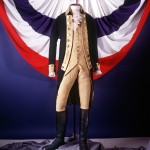 As Christopher Middleton’s chemistry teacher learns in my young adult adventure series, Central Park Story, it’s probably best not to mix potassium permanganate and ethanol or you might experience the following: 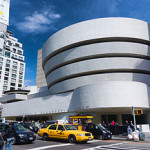 The curvilinear form of the museum stands in stark contrast to the surrounding buildings.

The Guggenheim Museum at 89th Street and Fifth was first conceived as a “temple of the spirit” that would facilitate a new way of looking at modern art.

Numerous locations in Manhattan were considered, but Mr. Guggenheim felt that the site’s proximity to Central Park was important. The park afforded relief from the city, while the building itself embodies architect, Frank Lloyd Wright’s, desire “to render the inherent plasticity of organic forms in architecture.”

In an equally subtle manner, this masterpiece of architecture embodies the same principle Olmsted himself espoused in the construction of his beloved park; that nature rules supreme. 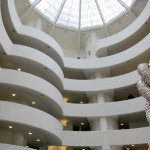 …while it’s interior is reminiscent of the inside of a nautilus shell.

I attempt to echo these same sentiments in the thoughts and actions of Christopher Middleton, the protagonist of my young adult adventure series, Central Park Story, who uses nature as a catalyst for change in his own life.

The Seven of Spades…Lucky or Not? 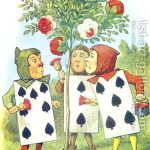 The Spades in Alice’s Adventures in Wonderland discussing how to paint the white roses red.

In Lewis Carroll’s Alice in Wonderland, Alice first meets three cards (the 2, 5 and 7 of Spades) in the Queen’s garden.

One of them explains that they accidentally planted white roses. Because the queen hates white roses they have to paint them red or the Queen will behead them. After the Queen arrives, she finds white roses and orders the execution of all three of them!

In my young adult adventure series, Central Park Story, I take a gentler approach by having the seven of spades appear in the Queen’s losing hand against the King, only to be vindicated and return to the Queen’s favor.

The Mayflower Compact: The First Truly Democratic Document in America 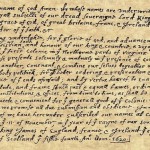 Though the original has been lost, this copy, written a few years later, still exists.

.The Mayflower Compact was the first governing document of Plymouth Colony. It was written by separatist Congregationalists (later referred to as Pilgrims) fleeing from religious persecution by King James of England.

It reads in part as follows:

In the name of God, Amen. We, whose names are underwritten, the loyal subjects of our dread Sovereign Lord King James, by the Grace of God, of Great Britain, France, and Ireland, King, defender of the Faith, etc.

Having undertaken, for the Glory of God, and advancements of the Christian faith and honor of our King and Country, a voyage to plant the first colony in the Northern parts of Virginia, do by these presents, solemnly and mutually, in the presence of God, and one another, covenant and combine ourselves together into a civil body politic; for our better ordering, and preservation and furtherance of the ends aforesaid; and by virtue hereof to enact, constitute, and frame, such just and equal laws, ordinances, acts, constitutions, and offices, from time to time, as shall be thought most meet and convenient for the general good of the colony; unto which we promise all due submission and obedience.

I have included a reference to this in my young adult adventure series, Central Park Story, both in recognition of its importance as the first democratic document written in America (by a non-native, that is) and to point out the inherent flaws in the democratic institution that it professes to embody.