The Central Park Cave and the Mark Twain Cave 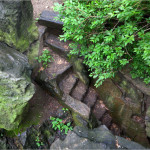 The staircase leading to the Central Park Cave, otherwise known as the ‘Indian Cave’

Although there is no material connection between the two, the Central Park Cave made me think of Tom Sawyer’s cave in Twain’s famous, The Adventures of Tom Sawyer.

The Mark Twain Cave in Hannibal, Missouri, covers some six and a half miles consisting of four entrances and 260 passages, while the Central Park Cave consists of a single large room.

Discovered by excavators when the park was under construction, it might have been a shelter used by Indians in the past. 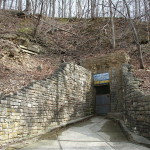 And the Mark Twain Cave…not a whole lot different. became an instant tourist attraction and a magnet for crime until it was eventually sealed in the 1930s.

The staircase leading to the wall that now covers the entrance is still visible from the Ramble and only adds to its mystery.

In my young adult adventure series, Central Park Story, I imagine the cave having a hidden corridor that leads underneath the Bethesda Fountain, not unlike Twain’s cave in Hannibal.

If Twain could stretch the truth, then so could I! 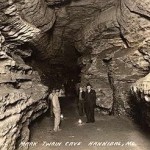 …until you get inside!