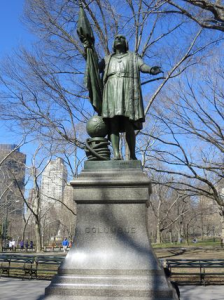 Yes, Columbus was Italian, so his first name was actually ‘Christoforo’ not ‘Christopher’.

But who cares about the spelling of his name? The main thing is that, if it wasn’t for Columbus, or Colombo, there wouldn’t be a Central Park Mall or a Central Park, or even a New York City.

When Christopher first sees his statue in the early morning fog at the foot of the promenade, he also misses a few minor details and thinks he’s wearing a miniskirt in the shape of a mushroom (possibly his robes being lifted by the wind).  What truly shocks him, however, is what happens next (see Central Park Story Book One)!

Click here to cancel reply.
< What To See When One Visits the Met (on the Front Steps, that is) Sir Walter Scott, I presume? >