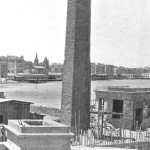 This is how it looked in 1881 in Alexandria, Egypt

Thutmose III would have taken offense at hearing it called ‘Cleopatra’s Needle’. The obelisk was over 1000 years old by the time Cleopatra was even born!

Thutmose III made this monument as an everlasting testament to his reign, and he clearly had a high opinion of himself because its inscriptions compare him to the gods.

Unfortunately, even Thutmose’s desire for immortality proved no match for the wear and tear of the industrial revolution. After it was transported from Alexandria to Central Park and dedicated in 1881, it took only a few decades of acid rain to erase a great deal of his claims. 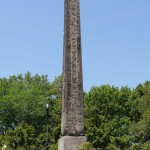 …and now in Central Park, NYC.

Regardless, I make full use of it as a place of mystery in my young adult adventure series, Central Park Story.