The Conservatory Garden at 106th Street: A Relatively Undiscovered Treasure 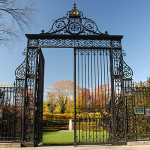 Prior to the 1980s, I would have called it the’ haunted garden’, since it was in a neighborhood where one was more likely to get mugged than smell the roses (I lived just eight blocks south in the 1970s and was once mugged in the same area).

Rescued and restored by the Conservancy as a part of its ongoing restoration of the park, it is now a delight to the senses. Passing through the Vanderbilt Gate (retrieved after one hundred years in storage),  one comes across three distinct gardens–Italian, English and French–sitting side by side, each one offering its own unique style and horticultural display. 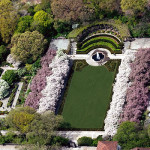 An aerial view of the Italian Garden. A visual delight!

Had this garden (the only truly formal garden in Central Park) been in the south rather than the north end of the park, it would certainly have been flooded with thousands more tourists every day. Being in a less frequented spot, one can actually sit by the fountains on a sunny afternoon and feel as if one has the entire garden to oneself!

Given my own mixed memories of the area, I have Christopher Middleton, the main character in my young adult adventure series, Central Park Story, both delighted and threatened when he happens upon it himself.

< Did Frederick Law Olmsted Keep A Personal Diary? The Naming of the Gates from 1862 to 1999…Talk About a Time Lapse! >