Home »Central Park Story - Book One »The Cooper-Hewitt Museum: A Nice Side Trip

The Cooper-Hewitt Museum: A Nice Side Trip 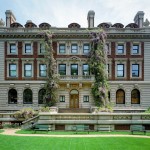 I always felt a close affinity to the Carnegie Mansion at 91st and Fifth, now known as the Cooper Hewitt Museum.

My mother’s apartment was a few blocks uptown, and we would walk past it on our way to church or whenever I went for a jog around the reservoir.

Now that I’m several decades older, my curiosity about its origins has been piqued, and I looked it up online.

The mansion was built in 1901 at the request of Carnegie who asked for a plain but roomy house with a garden for his daughter to play in. Plain it isn’t. Roomy it is. It has 60 ‘roomies’, as a matter of fact!

Carnegie had just finished publishing his book, The Gospel of Wealth, a year earlier in 1900, in which he declared that to die a wealthy man was ‘to die in disgrace’ and that one’s wealth, however great or small, should be distributed beforehand to the benefit of all.

You can almost hear the echo of people screaming ‘No!’ up and down Millionaires Row on Fifth Avenue to this day. But Carnegie, if nothing else, never paid much attention to what others thought of his methods. He proceeded to give away 350 million dollars (several billion in today’s terms) until his death in 1919, leaving only a meager $30 million to be distributed afterwards.

After his wife passed away in 1946, the mansion was donated by the Carnegie Corporation to the Smithsonian Institute and, around the time I began living in the neighborhood, was renovated and converted into the Cooper Hewitt National Design Museum, a museum devoted to several hundred years of design innovations, which explains why I was never knew much about it.

Christopher Middleton, in my young adult adventure series, Central Park Story, also walks past this iconic landmark, though he has other, more important things on his mind, like talking statues and cockatrices flying around Belvedere Castle!

< Baseball in Central Park–a Real Home Run for the Game Summerstage, New York Marathon, Rock Concerts, Shakespeare–How Much More Can You Fit Into a City Park? >