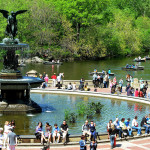 The Conservancy has done wonders to reduce crime in the city by turning places like the Bethesda Terrace that were formerly wastelands, into tourist meccas

Crime in Central Park started out modestly and then spiraled out of control into the 1970s, over a century later.

With the establishment of the Conservancy in the early 1980s, however, the crime rate took a sudden and dramatic nosedive, perhaps for the first time ever.

I happened to be walking through the Mall toward the end of Mayor Bloomberg’s final term in office, in 2013, and asked a policeman what crime was like in the park. He laughed and said it was down to almost nothing. When I asked him why, he didn’t have a ready answer. However, when I looked around and saw how many men in blue were standing around the general area, I felt the answer was clear. 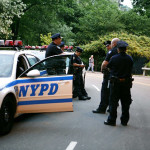 Apparently this deterring presence of police officers has changed since that conversation. Under Mayor DiBlasio’s leadership, crime in the park has spiked, proving that there are undeniable political factors that contribute to the ongoing crime rate.

Nevertheless, the park is still a world away from the dangerous place I was brought up living next to in the 1960s, and for that reason, I decided not to include any crime scenes in the park in my young adult adventure series, Central Park Story, even though it might have added some excitement!

Instead, I decided to focus on whatever crimes were taking place behind the scene.

< Buskers In Central Park: An Unexpected Treat Central Park Zoo: a Stroll on the Wild Side >