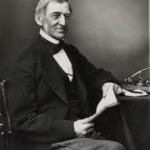 Ralph Waldo Emerson, the inspiration behind Transcendentalism
in the US.

“Nature” is an essay by Ralph Waldo Emerson, published in 1836. In it, Emerson put forth the foundation of Transcendentalism, which suggests that the divine, or God, suffuses nature, and that reality can only be understood by studying nature.

Emerson explains that to experience the “wholeness” with nature for which mankind is naturally suited, we must be separate ourselves from the flaws and distractions imposed on us by society. He believed that solitude is the single most important mechanism through which we can fully engage with the world of nature.

Whether Olmsted ever read “Nature” is impossible to know (Olmsted’s education was sporadic and piecemeal, at best), but his design of Central Park certainly acts as a living illustration of Emerson’s philosophy of Transcendentalism.

Olmsted’s goal was to suffuse nature back into the soul of each visitor to the park by creating a sense of nature’s wholeness that was completely separate from the distractions of the surrounding city. He did so by creating inspiring vista after inspiring vista, as if one were walking down a gallery of paintings, until one made contact with the inner genius of nature herself.

If Emerson brought the philosophy of Transcendentalism to the intellectual world of his day, it is fair to say that Olmsted brought it to the urban world.

In my own, lesser way, I try to bring it to the world of teenagers in my young adult adventure series, Central Park Story.