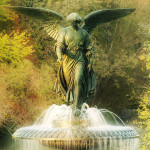 A fitting tribute to the healing powers of water..as well as to a dearly loved friend…

The eight-foot bronze statue that stands on top of the fountain in the Bethesda Terrace, also known as the Angel of the Waters, shows a female winged angel walking on water, after which the water cascades into an upper basin and into the surrounding pool.

It is a striking and exquisitely beautiful piece of art. It also contains some deeply personal meaning both for its designer(s) and for the city itself.

Olmsted and Vaux, the principle designers of the park, didn’t like the idea of including statues at first; however, with the Croton Reservoir having recently been opened (1842) and its holding tank a short distance away, having a statue of an angel seemed a fitting tribute to a marvel that brought fresh water to the inhabitants of the city. Hence, what was first known as the Water Terrace was renamed the Bethesda Terrace in reference to the The Gospel of John, where there is a description of an angel blessing the Pool of Bethesda and bestowing upon it mystical healing powers.

In a separate but parallel vein, the statue was created by a highly-accomplished woman artist, Emma Stebbins, and a first for this country so far as awarding public commissions for women were concerned. Up till then it was unknown for a woman to receive such a high honor. 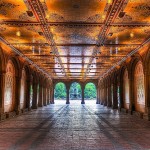 When viewed from the Mall, the angel appears to be floating among the pedestrians, but when seen from the arcade (depicted above) it almost appears to be in a private room, perhaps demonstrating the full range of its meaning to its creator

Adding yet another layer of meaning, Ms. Stebbins was gay. Unfortunately, her partner, the then-famous actress Charlotte Cushman, contracted breast cancer and died a few years after its dedication in 1873; and it is no stretch of the imagination to suggest that the statue was made in tribute to her partner, both in likeness and in spirit.

Perhaps it was also out of sympathy for Ms. Stebbins and her partner that Vaux, who designed the base of the fountain and the terrace itself, suggested the statue be dedicated to Love.

Love, the healing quality of water, the grace of God, and high art, are all beautifully intertwined in this great masterpiece, just as its jets of water join and cascade into its pool.

In my young adult adventure series, Central Park Story, I have tried bring additional meaning to this exceptional piece of art.

< Central Park Zoo: a Stroll on the Wild Side Is Something Really Buried Under Cleopatra’s Needle in Central Park? >