Homeless in Central Park During the Great Depression 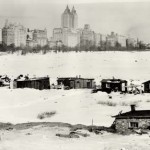 A homeless encampment at the north end of the park in the early 1930s. Will it happen again?

Imagine strolling through Central Park and stumbling across an encampment for the homeless.

Such an encampment actually existed during the first years of the Great Depression (see pic to the right).

Times were tough, and people were desperate (sound familiar?).

Even though public sentiment was firmly on the side of the Hooverville residents, the Parks Commissioner was forced to raze it due to lack of sanitary conditions.

With homelessness in the city having recently topped 60,ooo for the first time ever (2015), it’s not that hard to imagine something similar happening today.

For this reason, I have tried to highlight the problem of homelessness in my young adult adventure series, Central Park Story.

< The North Meadow: The ‘Great Midwest’ of Central Park Mount St. Vincent Convent: Where Olmsted and His Family Once Lived >