What is a Genius Loci? 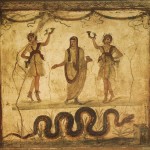 A Genius Loci as depicted in Roman times

It turns out that there is no one answer to the question ‘What is a genius loci?’

In classical Roman religion, a genius loci was the protective spirit of a place. It was depicted in religious iconography as a figure holding attributes such as a cornucopia, patera (libation bowl) or snake.

In contemporary usage, genius loci refers to a location’s distinctive atmosphere, or a “spirit of place” rather than a distinct guardian spirit.

The British poet, Alexander Pope, made the genius loci an important principle in landscape design with the following lines from Epistle IV, to Richard Boyle, Earl of Burlington:

Consult the genius of the place in all;
That tells the waters or to rise, or fall;
Or helps th’ ambitious hill the heav’ns to scale,
Or scoops in circling theatres the vale;
Calls in the country, catches opening glades,
Joins willing woods, and varies shades from shades,
Now breaks, or now directs, th’ intending lines;
Paints as you plant, and, as you work, designs.

Pope’s verse laid the foundation for one of the most widely agreed principles of landscape architecture: that landscape designs should always be adapted to the context in which they are located.

Of equal importance, in modern works of fantasy, a genius loci is an intelligent spirit or magical power that resides in a given place. Genius loci are usually portrayed as being extremely powerful and very intelligent, though there is a great deal of variation on these points.

In my young adult fantasy series, Central Park Story, I chose to portray the Genius Loci that Christopher Middleton encounters at the Bethesda Terrace as the innermost genius of nature in its omnipresent form.

< Bet You Have No Idea What a Lemniscate Is! The Arcade at the Bethesda Terrace: a Playground for the Imagination >