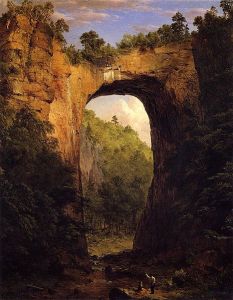 Its hard to understand the design of Central Park without first coming to terms with the influence of the Hudson River School.

In the early part of the 19th century, America was in need of its own artistic expression and a group of artists that came to be known of as the Hudson River School of Art turned out to be the answer.

Its founders believed that nature in the form of the American landscape was an ineffable manifestation of the divine and had only to be rendered as art to become the expression America was seeking at the time.

It boasted many stellar exponents but foremost among them were Thomas Cole and Frederick Church. These two artists combined inspiring landscapes and the play of light and shade to create an ethereal mixture that took the viewer into the realm of the mythical and even to the divine itself.

The entrance to the Ramble…reminiscent of the painting by Frederick Church above.

Prior to photography, their paintings and others like them were the means through which city dwellers could catch glimpses of the amazing country in which they lived, and they heaped praises on these artists for bringing them closer to its glory.

Not only were Olmsted and Vaux profoundly influenced by this style of painting (Vaux’s sister was actually married to a painter in the Hudson River School) but they sought to capture similar scenes in their design of Central Park and turn it into a gallery of inspiring images. 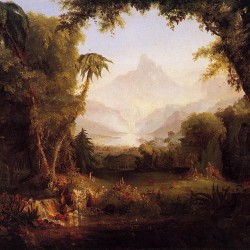 Expulsion from the Garden of Eden by Thomas Cole (1828). The type of grandeur that Olmsted sought in his landscaping of Central Park

While visiting the Met and seeing the painting of Thomas Cole to the right, Christopher Middleton, the main character of Central Park Story Book One, stops and stares in amazement, just as Olmsted and Vaux might have done when they viewed the same paintings for the first time themselves.

Click here to cancel reply.
< The Ramble Lake (Built from Scratch Like Everything in Central Park) Inside the Metropolitan Museum of Art…boring, boring, boring! >