Home »Central Park Story - Book One »Indians in Central Park…Yes, and They Left a Cave Behind, too!

Indians in Central Park…Yes, and They Left a Cave Behind, too! 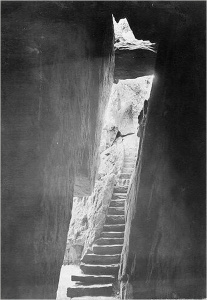 The entrance to the mysterious Indian Cave in the Ramble

Most people don’t know about the Indian Cave in Central Park.

First of all, it’s not that easy to find. Yes, it’s in the heart of The Ramble, but it’s also at the bottom of a series of stone steps that descend into a narrow gulley beside the lake–not exactly something that calls attention to itself.

Some workmen first discovered it when blasting away rocks during the park’s construction. It was found to be quite large–some twenty to thirty feet long with a ten foot ceiling. It also had a wide flat floor and showed signs of having once been used as a shelter, most likely by Native American Indians.

It was a big attraction in the park until someone was found dead inside (in the 1920s) from an apparent suicide. After that, it was sealed off and pretty much ignored.

Now, if you’re a writer like myself, you’re not about to ignore details like this. This is the sort of thing that writers live for, and it had to be exploited to the hilt.

Hence, it features prominently in a number of episodes of my young adult adventure/fantasy series, Central Park Story, and I play with it in as many ways as my imagination can come up with.