Home »Central Park Story - Book One »King Jagiello of Poland (aka, the Dude with the Twin Swords)

King Jagiello of Poland (aka, the Dude with the Twin Swords) 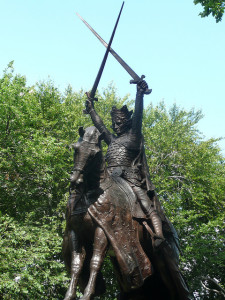 Statue of Jagiello, King of Poland

One of the most impressive statues in Central Park is that of Jagiello, King of Poland.

Encountering its imposing presence along one the park’s circuitous paths, it’s hard not to imagine it leaping off its pedestal and charging through the forest after a dragon!

Once a part of  the Polish pavilion at the New York World’s Fair of 1939, it ended up staying in New York for the duration of the Second World War and, in 1945, was offered to the city as a gift from the people of Poland as a symbol of their defiance against totalitarianism.

Even from Christopher’s vantage point along the ramparts of Belvedere Castle, it must have looked formidable, and it’s no wonder he compared it to a Humvee and was glad he wasn’t standing in its way! (see Central Park Story Book One)

If there was ever a dragon slayer, he would have to resemble Jagiello, King of Poland!

Click here to cancel reply.
< Christopher’s ‘Invisible’ Apartment What the Heck Is a Cockatrice, Anyway?! >