Home »Central Park Story - Book Two »So You Know What a Lemniscate Is, But What About a Mobius Strip?

So You Know What a Lemniscate Is, But What About a Mobius Strip? 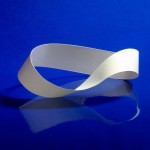 Okay, ants! On your mark..get set…go!

So it turns out that you were smart enough to know what a lemniscate is but you’re stumped when it comes to a Mobius strip?

Well, here’s the answer to the second half of my two-part quiz:

A Mobius strip is a two-dimensional object that can only exist in three-dimensional space.

Let’s make one: cut a strip of paper about 1/2″ wide and about a foot long. Cut that in two, give it a half twist, and tape the ends together.

You now have a Mobius strip, where an ant could travel from any one place to any other place without crossing an edge. This makes it a two-dimensional object in three-dimensional space, as mentioned above.

That’s what Christopher Middleton thinks when he tries to solve a riddle he’s been given in my young adult adventure series, Central Park Story.

By the way, if you’re still interested in even stranger topographical phenomenon, try looking up a ‘Klein bottle’, and see if you can figure that one out!