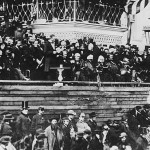 It is chilling to think that the conspirators who will kill Lincoln only a few days after his second inaugural address are present at his speech. Even John Wilkes Booth himself is visible in a panoramic shot of this same photograph!

..at least toward the end when he eloquently states:

With malice toward none, with charity for all, with firmness in the right as God gives us to see the right, let us strive on to finish the work we are in, to bind up the nation’s wounds, to care for him who shall have borne the battle and for his widow and his orphan, to do all which may achieve and cherish a just and lasting peace among ourselves and with all nations.”

A few days later, Lincoln would be shot dead by an assassin’s bullet.

In my young adult adventure story, Central Park Story, I have my main character, Christopher Middleton, echo these same sentiments of forgiveness and charity after being faced with a similarly unavoidable conflict.