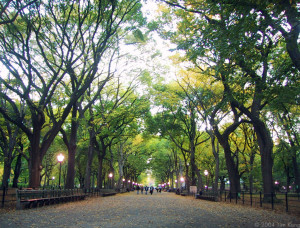 Elms along the Promenade in Central Park

As an artist brought up on a farm, Christopher Middleton would naturally notice the elms on his very first day in the city.

Not so, when it came to my own first year in the Big A. Like most kids, I took them for granted even when my mother pointed them out (she grew up in Boston where there used to be tons of elms). So I was surprised to discover many years later that the elms in Central Park are one of the last remaining stands.

A devastating disease called ‘Dutch Elm’ wiped out the vast majority of them in the mid 19th Century. Somehow the ones in New York City were spared. Divine providence? Perhaps. Especially given that Olmsted made use of these magnificent trees to create a sense of space similar to the vaulted interior of a cathedral. In fact, the walk that leads to the Bethesda Terrace used to be called ‘Cathedral Walk’.

The elms didn’t always gain favor with the Divine, however. When the park was under construction and the public demanded large trees, already-mature elms were selected and transplanted there. Despite the promise of $30 for any that survived beyond the first three years, they soon died. More were planted as seedlings and those matured yet experienced a similar fate to their predecessors in the 1890s. The elms we see today were planted in the 1920s and are close to 100 years old. Someone must have finally figured out how to grow them!

Imagine what these wonderful trees have ‘seen’ in all this time?! Christopher isn’t the only one who has a story to tell about the sights and sounds of the park!

Here’s a recent article written in the New York Times that talks about this often-overlooked,  ‘hidden’ treasure.