Home »Central Park Story - Book One »What is a March Hare (as Opposed to an April Hare)?

What is a March Hare (as Opposed to an April Hare)? 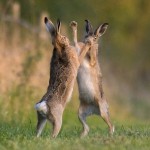 Two hares going at it, possibly in March!

“Mad as a March hare” is a common English phrase, both now and in Lewis Carroll’s time.

It is reported in The Annotated Alice by Martin Gardner  that this proverb is based on popular belief about the hares’ behavior at the beginning of the breeding season. Early in the season, unreceptive females often use their forelegs to repel overenthusiastic males.

Like the Mad Hatter, the March Hare feels compelled to behave as though it is always tea-time because the Hatter “murdered the time”.  One of the original illustrations even shows him with straw on his head, a common way to depict madness in Victorian times. 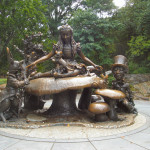 Alice in Wonderland with the March Hare to Alice’s right.

In my young adult adventure series, Central Park Story, the Hare comes across as being more pragmatic than mad (after all the Hatter is mad enough!), forever checking the time and claiming to be late for one thing or the other.

< The Seven of Spades…Lucky or Not? Does the Dormouse Have Anything to do with a Common Mouse? >