Not your typical house in the country, the Biltmore featured massive gardens and a 125,000 acre backyard!

George Washington Vanderbilt, the youngest son of the railroad magnate, Cornelius Vanderbilt, fell in love with the magical mountains of Asheville, North Carolina, on a visit there with his mother, and commissioned Richard Morris Hunt to build a 175,000 square foot home on the banks of the French Broad River (yes, those are three zeros!).

Vanderbilt  envisioned a park-like setting for his new home and commissioned Olmsted to design the extensive grounds. However, Olmsted was not impressed with the condition of the 125,000 acres that surrounded the house (yes, those are three zeros, again!) and advised Vanderbilt to turn them into a park, establishing the first forestry education program in the U.S.

Of course, Olmsted made sure to incorporate 75 acres of formal gardens directly around the house, including an Italian formal garden, a walled garden, a shrub and rose garden, numerous fountains, and a conservatory with individual rooms for palms and orchids. 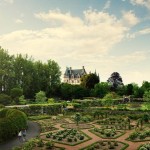 ‘Have a walk around the garden, but don’t be late for lunch!’

By the time it was nearing completion in 1895, thirty years after completion of his work on Central Park in New York City, Olmsted was already slipping into senility and his son, Rick, had to finish the project. But what a project, and what a fitting farewell to one of the greatest geniuses ever to grace the field of landscape architecture!

< Central Park: A Gallery of Images New York Historical Society–A Great Place for a School Outing (and an Argument) >