The Ramble Lake (Built from Scratch Like Everything in Central Park) 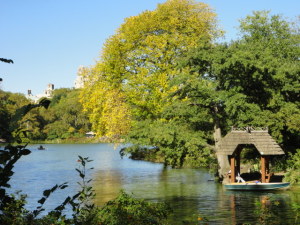 The Ramble Lake in Central Park. Hard to believe it was once a piece of uneven, swampy ground!

The Ramble Lake wasn’t always a lake. It began as a conglomerate of swampy, uneven ground and sluggish water that flowed from underneath the present-day Museum of Natural History before emptying into the East River.

What to do with such a difficult piece of land?

Olmsted and Vaux came to the rescue by excavating the bedrock and damming the eastern boundary to trap the flow of water toward the east, and they accomplished this so deftly that it’s hard to imagine it wasn’t always a lake!

Beneath its glassy surface is a graded terrace of bedrock that is a mere 7 feet deep at its center (for the safety of those who might fall in like Jennifer in Central Park Story Book One) while its edges are carefully planted to make it appear naturalistic.

When it was first opened in 1858, the popular sport of skating brought many thousands of visitors. Eventually the Lake was closed to skating and a rink was opened in the south end of the park, but one can still enjoy gliding across its surface in a row boat.

Click here to cancel reply.
< Vogue Magazine and Current Fashion Trends in Central Park The Hudson River School and Its Influence on the Design of Central Park >