Serendipity’s Shot at the World’s Most Expensive Sugar High! 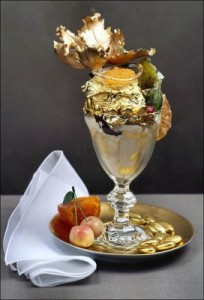 Forget about Christopher’s favorite triple fudge chocolate ice cream sprinkled with Godiva chocolate bits and gummy bears. Get a load of this over-the-top dessert served at Serendipity III to the tune of $1000! (Yes, that’s a one with three zeros after it!)

The description alone is worth at least a dollar or two: ‘made with 5 scoops of the Tahitian vanilla bean ice cream, Madagascar vanilla covered in 23K edible gold leaf, drizzled with the world’s most expensive chocolate, Amedei Porcelana, and covered with chunks of Chuao chocolate. It is suffused with exotic candied fruits from Paris, gold dragees, truffles and Marzipan Cherries and topped with a tiny glass bowl of Grand Passion Caviar. It’s sweetened and infused with passion fruit, orange, and Armagnac. The sundae is served in a baccarat Harcourt crystal goblet with an 18K gold spoon, a petite mother of pearl spoon, and topped with a gilded sugar flower by Ron Ben-Israel.’ 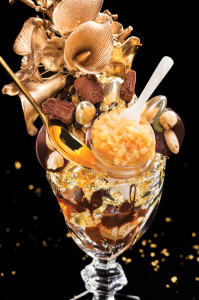 Here’s seconds, though I still don’t see the ice cream.

Had enough? If not, they serve another sundae that costs a mere $25K (I’m not bothering with all the zeros) and needless to say, set another world record. For myself, I think I’ll stick with one of the thousand dollar variety (I’m on a tight budget these days).

To tell you the truth, I ate at Serendipity with my mother on a special occasion (I forget what it was). I think I wanted a banana split but wasn’t sure my mother could afford it, so I ordered a scoop of vanilla ice cream with chocolate sauce instead. I ended up getting the banana split as I recall. That to me was enough to set a world record. The desserts that Christopher and Ashley enjoy in my young adult fantasy series Central Park Story or the over the top dessert to the right never even came to mind. But I loved the banana split. 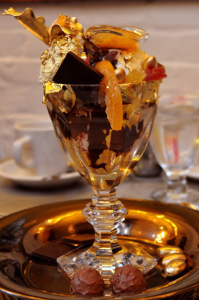 Enough! I’m totally sick, but I finally found the ice cream. It was melted on the bottom!