Skateboarding in Central Park in 1965 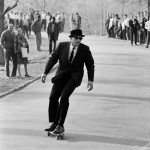 You probably think you’ve seen it all when it comes to New York, but New Yorkers like to have the last word on every subject–skateboarding being no exception.

In the pic to the right, a well-heeled New Yorker takes a ride on a board in Central Park well before skateboarding became ‘cool’. And, in case you’re wondering what New Yorkers might have come up with regarding the final word in skateboarding, get a load of this: