Home »Central Park Story - Book One »Skating in Central Park: As Popular Back in the mid-1800s as it is Today

Skating in Central Park: As Popular Back in the mid-1800s as it is Today 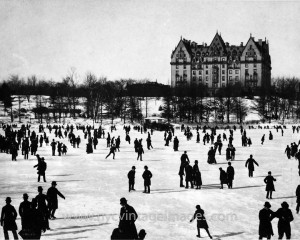 Facing west from Central Park with Skaters on the Ramble Lake and the Dakota in the background, c. 1890.

Today, there are two skating rinks in Central Park, one in the north end and one in the south, but there used to be only one in the middle . . . the Ramble Lake.

When the park was  first opened to the public in the late 1860’s, skating was a popular sport and brought tens of thousands people into the park.

With baseball and bicycling still several decades away, it was the only sport that brought the community together–a very democratic phenomenon that reflected the purpose of the park in the first place.

It wasn’t until the 1950s that the Lake was closed to skating and moved to present-day Wollman’s skating rink in the southernmost end of the park. 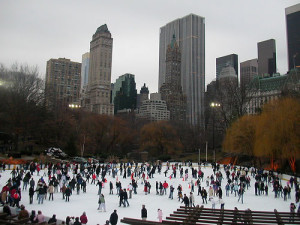 Hence, when it came to writing my young adult adventure series, Central Park Story, it was natural to include skating in several of the scenes.