Home »Central Park Story - Book Three »When Did Thanksgiving Start in the US?

When Did Thanksgiving Start in the US? 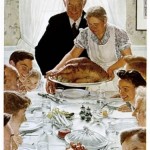 The spirit of Thanksgiving endures despite the vagaries of time…

The answer isn’t as simple as you might think.

President Washington proclaimed the first nationwide thanksgiving celebration in America by marking November 26, 1789, “as a day of public thanksgiving and prayer to be observed by acknowledging with grateful hearts the many and signal favours of Almighty God”.

However, from the time of Washington until the time of Lincoln, the date when it was celebrated varied from state to state.

The first time Thanksgiving was celebrated on the same date by all states was in 1863 by presidential proclamation from Abraham Lincoln in an attempt to foster a sense of American unity toward the end of the Civil War; but due to the South’s refusal to recognize Lincoln’s authority, a nationwide Thanksgiving date was not fully realized until Reconstruction was completed in the 1870s.

Finally, in 1941, President Franklin Roosevelt changed the date from the last Thursday of November to the third Thursday of the month to lift the country’s spirit in the midst of a global war.

Fortunately, the spirit in which Thanksgiving was begun in the 1700s, and which I try to preserve in my young adult adventure series, Central Park Story, persists “as a day of public thanksgiving and prayer to be observed by acknowledging with grateful hearts the many and signal favours of Almighty God”.

< Russian Imperial Dresses–Better Than Oscars Night! Who Discovered America? And What Does This Have to Do with Central Park? >