The Statue of ‘Black Dan’ in Central Park–A Sight to Behold! 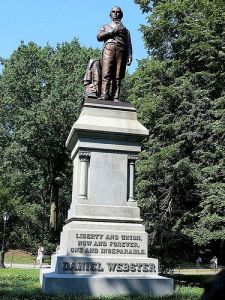 If there’s a statue in Central Park that could send a shiver down your spine, it’s the statue of Daniel Webster; not because of its impressive size but because the sculptor, Thomas Ball, managed to capture ‘God-like Dan’ in all his glory.

Back in the 1850s, most everyone had two things in their homes: a picture of George Washington and a bust of Daniel Webster. Some years later, they might have added a Webster’s dictionary. After all, he was still considered to be the greatest master of the English language of his age.

Like most public figures in the 1800s, Webster was rife with contradictions. As the much-revered senator from Massachusetts, he spoke of the greatness of his country and remained a steadfast supporter of the Union, yet he thought nothing of receiving gifts on the sly if he gave a speech on someone else’s behalf, and he made the unpopular suggestion that a compromise be struck with the slave states in the South.

It used to be that people’s livelihood depended upon how well they spoke, so probably he never questioned that he had the right to support himself with his words at the same time as he felt he was defending the best interests of the country he adored. Still, contradictions are contradictions, and he remains a complicated figure to this day.

However he might appear to others, it’s no wonder that Christopher stops dead in his tracks as soon as he spots the god-like statue of ‘Black Dan’ in Central Park Story Book One. As I said in the beginning, just one look at him, and it can send a shiver down your spine!

Click here to cancel reply.
< Taking Exams…At Times You Just Have to Rely on Street Smarts Bet You Didn’t Know Even Half of These Amazing Facts About Central Park >