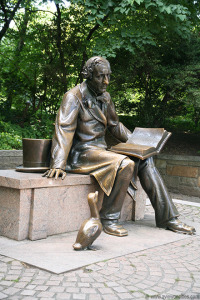 The Statue of Hans Christian Anderson and the ‘ugly’ duckling–a little too cute for someone not to try and take home!

The statue of Hans Christian Anderson, a Danish author famous for his children’s stories The Little Mermaid and The Ugly Duckling, sits within a stone’s throw of the statue of Alice and her motley crew (see previous post).

A Danish women’s society donated it to the park in 1956, and it has been the scene of summertime readings of Anderson’s moralistic tales ever since.

If they’d made the two-foot high statue of the ugly duckling a tad uglier, it might not have been stolen as it was in 1973. Fortunately, someone discovered the purloined duck in a dump site, and it was later reinstalled.

I’m sure if Anderson were alive, he would have found a moral in that story too!

Not so with Christopher Middleton in Central Park Story Book One who has other, more pressing issues on his mind as he walks past it on his way to meet Ashley at the Central Park Carousel.

Click here to cancel reply.
< Starfest: A Festival of the Stars in the Sheep Meadow Bet You Didn’t Know There Are Two Alice in Wonderland Statues in Central Park! >