A Jousting Tournament in Central Park? 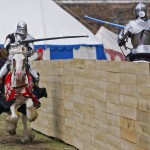 Ivanhoe, by Sir Walter Scott, was the first historical novel of its kind and set off a train of similar type novels.

By today’s standards its plot seems cookie-cutter with lots of valiant fighting and flag-waving tournaments, but one has to remember that it was the original cookie cutter back in 1820 when it was penned.

Seeing as there’s already a statue of Sir Scott on Literary Walk, I decided to make Sir Scott and his novel, Ivanhoe, a part of my young adult adventure series, Central Park Story.

Of course, this required some creativity. The castle was obvious. Belvedere Castle is the most prominent landmark in the park, sitting on top of a 90-foot bluff that overlooks a pond and a field. The statue of King Jagiello with his two crossed swords that stands a few hundred yards away, proved to be another convenient element. But where was I to find a horse for Christopher Middleton, the main character, to ride in a tournament? Then I remembered the horses on the carousel next to the Dairy. Ridiculous as it may seem, I have Christopher ride a wooden horse from the carousel!

< Webster’s 1820 Speech at Plymouth Really Rocked! Is Central Park Any Safer Today Than in the Past? >