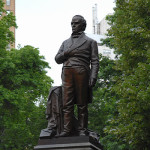 On a cold December 20th in 1820, Daniel Webster gave an oration commemorating the bicentennial of the Pilgrim’s landing in Plymouth, Massachusetts.

‘There is a local feeling connected with this occasion too strong to be resisted,’ he said, ‘a sort of genius of the place which inspires and awes us…’ And he went on to describe in vivid detail what he thought it might have been like for these adventurous Europeans when they first set foot in North America.

Though some might consider it a bit of  a stretch, I find it no coincidence that the monolithic statue of Webster and the statue of the Pilgrim face each other from opposite sides of the park, as if Webster were giving his speech and the Pilgrim were listening. 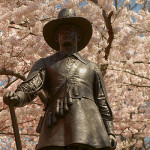 …and the Pilgrim statue on the east side of the park at 72nd Street near Fifth Avenue listening in.

No doubt the park commissioners were aware of Webster’s famous oration and so decided to place the statues accordingly.

In my young adult adventure series, Central Park Story, I have Webster give a modified version of his Plymouth speech to the Pilgrim as a sort of modern day re-enactment in honor of their being on opposite sides of the park.