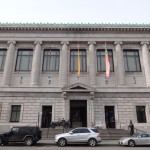 Looks like a bank…Guess what? It’s architects specialized in designing banks!

The New-York Historical Society (not to be confused with the Museum of the City of New York) at the corner of 77th Street and Central Park West is the oldest museum in New York City and predates the founding of the Metropolitan Museum by nearly 70 years. Its art holdings comprise more than 1.6 million works. Among them are a world-class collection of Hudson River School paintings, including major works by Thomas Cole and Frederick Church.

It’s proximity to my fictitious Central Park School in my young adult adventure series, Central Park Story, made it an easy choice as a location for a confrontation between my main character, Christopher Middleton, and his girlfriend, Ashley. What better place than a museum for an argument?