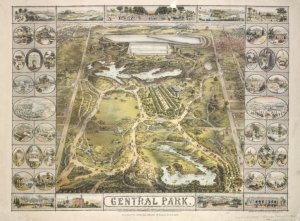 I spent several years researching Central Park for my ongoing young adult adventure series, Central Park Story, and, in the process, I came across a number of features of the park that surprised and, in some cases, shocked me.

Here are a few of them, and I’d be most curious to know if you were aware of any of them yourself:

–The Mall is the only formal aspect of the park, the rest of the park being devoted to nature.

–The Mall points due north (the rest of the city points north east, so the Mall is at an angle to the actual grid of the city).

–There are three waterfalls in the park, all of them run artificially by hidden pumps.

–The Ramble Lake is terraced with concrete and is only seven feet deep in the middle (it used to be a swamp). This was done to protect skaters when it was used as a skating rink from the 1860s to the 1950s.

–A cave was discovered in the Ramble when the park was under construction. It was a popular tourist attraction until the 1920’s when someone was found murdered there, and it was finally sealed. It was called the Indian Cave because it was assumed to have been used by Indians as a shelter before New York was settled by white men.

–A village of freed slaves once existed in the area near Belvedere Castle, and was abandoned in the 1850s when the park was being built.

–A casino once stood where the Naumberg Bandshell stands today. It was frequented by the mayor (Jimmy Walker) as well as a by gangsters, and was only torn down in the Great Depression under Mayor Fiorello LaGuardia. Its menu was more expensive than that of the Plaza Hotel at 59th Street and Central Park South (a rib steak cost a whopping one dollar!)

–A herd of sheep used to graze in the Sheep Meadow but were removed during the Great Depression when people started slaughtering them for food.

–General George Washington’s main headquarters was once located next to the Harlem Meer in the northeastern end of the park (Fort Fish). Washington was forced to abandon it under threat by the British and didn’t return to reclaim New York until after the Revolutionary War was over. (He was made president in Federal Hall on Wall Street).

–an actual fort (block house) still stands in the northwest corner of the park at 110th Street. It was built in 1812 to help defend the city from the British. The British never came, but the block house remains there to this day.

–The north end of the park was designed to resemble the Adirondack region of New York, a region that was popular with the wealthy as a location for their summer homes.

–The northeastern side of the park was used as an encampment by Union troops during the Civil War and housed an orphanage called St. Vincent’s where Frederick Law Olmsted and his family once lived.

And the list goes on…but at least it gives you a taste about what an amazing cultural treasure the park really is! 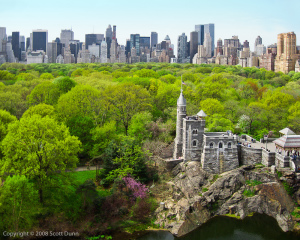 < The Statue of ‘Black Dan’ in Central Park–A Sight to Behold! A Geometric Pattern Buried in the Design of Central Park? Does it Really Exist? >