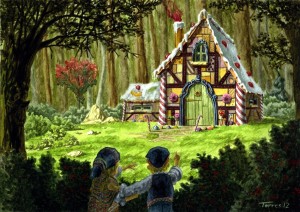 Hansel and Gretel…what an awesome story! Imagine yourself in their shoes (or wooden clogs)!

Hansel and Gretel has to be one of the most awesome children’s stories every written.

First of all,  two kids find themselves abandoned in the deep, dark woods of Germany. Scary stuff, indeed! Then they find their way out by following a trail of breadcrumbs that they purposefully left behind. Pretty neat trick! Last but not least, they discover a house made entirely of candy (Yum!) but are captured and held prisoner by a witch (Yikes!) that they toss in an oven and burn to a crisp (Go for it!!).

Marionette performances of Hansel and Gretel, Snow White and the Seven Dwarfs, and Sleeping Beauty are offered regularly at the Swedish Cottage next to Belvedere Castle; and if you ever find yourself in the area and at loose ends, and want to take a step back into childhood yourself you might want to take a peek. Christopher and his girlfriend, Jennifer, stop to watch one of the performances themselves (Central Park Story Book One) only to see something even more frightening than a witch being tossed in an oven! 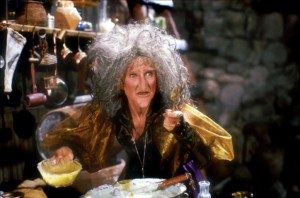 The jig is up, Witchy-Witch! It’s into the oven with you!!