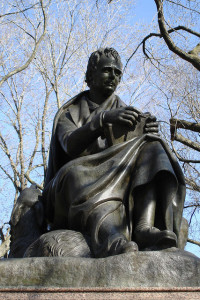 The statues along Central Park’s Literary Walk are an odd lot of characters, to say the least!

First of all, there aren’t any American writers or poets, with the sole exception of Fitz Greene Halleck (whom most people never heard of). Blatantly missing are dozens of literary luminaries of the 19th and 20th centuries–Longfellow, Poe, Whitman, Frost, to name just a few. So what happened?

It turns out that getting a statue erected in the park was more a matter of arm-twisting than notoriety. No one set out to create a visual catalog of America’s literary giants in Central Park. They simply liked someone and lobbied to have his statue installed there–very American, right?

America was also less than a century old in the mid-1800s and was still borrowing heavily against the European culture from which it emerged, which helps explain the presence of statues such as William Shakespeare and Robert Burns, for instance.

In the case of Sir Walter Scott (see pic), one can imagine another, perhaps more meaningful, connection. His historical novel Ivanhoe, which was very popular in the 19th century, was about the emergence of an egalitarian society from the darkness of the Middle Ages–much like the United States emerging from the struggles of the Revolution and the Civil War.

Christopher Middleton, being a lazy student by nature, has to be force-fed information both at school as well as  in the park in Central Park Story Book One, though the idea of an egalitarian, as opposed to a class-based society, soon becomes a major issue for him in his struggles to deal with the world around him.

Click here to cancel reply.
< Mr. Cook Splits His Pants in School! Ivanhoe by Sir Walter Scott–Yes, You Can Tell a Book by its Cover >