Home »Central Park Story - Book One »Tavern on the Green: No Longer a Retirement Home for Sheep

Tavern on the Green: No Longer a Retirement Home for Sheep 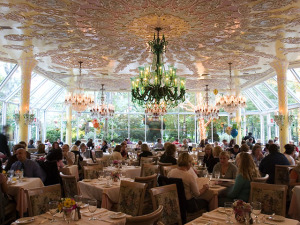 The Tavern on the Green main dining room (it has since been renovated) where Christopher spots a herd of sheep running down the aisle.

If you think the Loeb Boathouse Restaurant is swanky, how about the Tavern on the Green, where Ashley’s parents take Christopher out for Thanksgiving dinner in Central Park Story Book One?

It used to be a sheepfold at a time when sheep grazed in the Sheep Meadow (yes, you heard me–sheep used to graze in the Sheep Meadow!) It was later moved from the north end of the meadow to its present location at 67th Street off Central Park West and is famous for its bucolic setting and haute cuisine.

If you’ve read to the end of Central Park Story Book One, you’d know that Christopher sometimes ‘sees’ things that aren’t really there and spots a herd of sheep heading down the aisle and out the glass windows of the restaurant. Naturally, he takes this as an omen about his future!

Click here to cancel reply.
< Old As Time and the Issue of Homelessness in NYC Ashley’s Townhouse on East 68th Street >