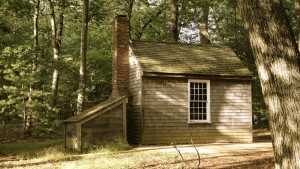 Walden, a book by by noted Transcendentalist, Henry David Thoreau,  is part personal declaration of independence, part social experiment, and part manual for self-reliance. Published in 1854, it details Thoreau’s experiences over the course of two years, two months, and two days in a cabin he built near Walden Pond in Concord, Massachusetts.

By immersing himself in nature, Thoreau hoped to gain a more objective understanding of society through personal introspection which, in many ways is what happens to Christopher Middleton, the main character in my young adult adventure series, Central Park Story.

Of course, it wouldn’t be possible without a little imagination and fantasy mixed in, but I wanted to prove to my readers, both young and old, that there are no limitations when it comes to nature.