Old As Time and the Issue of Homelessness in NYC 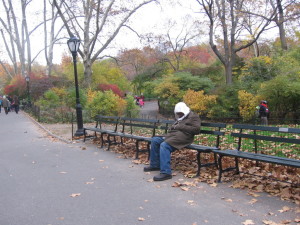 Homeless man in Central Park. Is he really any different than you or me?

Old As Time is a character I created in order to put a face on the homeless problem in New York City.

Despite the great leaps of progress the city has made in the area of crime, the homeless situation has only worsened over the same span of time.

As of March 2015, over 60,ooo sought refuge in city shelters every night, up a dramatic 12% from the previous year. Yet building more shelters or even offering housing subsidies to the homeless isn’t the answer. Homelessness is a profound reminder that something is lacking at the very foundation of the society we claim to be are a part of.

Perhaps Christopher, the main character in Central Park Story Book One, has a valid point: only in a society that is democratic in the true sense of the word, where people are viewed as equals and afforded equal opportunities from education on up, can such blemishes be fully eradicated.

Click here to cancel reply.
< 7th Regiment Memorial: A Statue by John Quincy Adams Ward Tavern on the Green: No Longer a Retirement Home for Sheep >