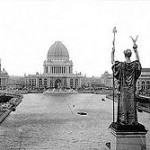 The Exposition was like a dream arising out of sleep.

The World’s Columbian Exposition was held in Chicago in 1893 to celebrate the 400th anniversary of Christopher Columbus’ arrival in the New World in 1492.

The iconic centerpiece of the fair, the large water pool (to the right), represented the voyage Columbus took to the New World.

The Exposition was an influential social and cultural event and had a profound effect on architecture, sanitation, the arts, Chicago’s self-image, and American industrial optimism, in general.

It was, in large part, designed by Daniel Burnham and Frederick Law Olmsted, and was the prototype of what Burnham and his colleagues thought a city should be like. It was designed to follow Beaux Arts principles of design, namely French neoclassical architecture principles based on symmetry, balance, and splendor.

< Jervis McEntee–One of the Not-So-Colorful Stars of the Hudson River School Central Park: A Gallery of Images >