Home »Central Park Story - Book Five »The New York Times: the Heartbeat of the City and of the Freedom of the Press 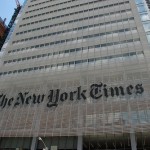 < The Angel of the Waters at the Bethesda Terrace: the Most Powerful Symbol in the Park Olmsted and the Creation of a City Identity >